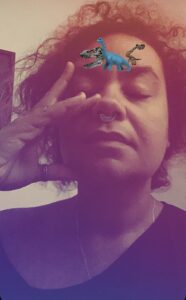 i’m trying telepathy to reach you because a lot is going on that i could use some ancient insight on. and frankly i don’t know when i’ll be allowed in the chicago airport again.

dino (smiling): i’m always available. but if i explained how, it might mess up our whole thing.

amb: like i told santa, i choose the magic.

dino: every time. so. are you here to tell me where the masses have gone?

dino: i almost exclusively see in patterns these days. the river is a stream, the stream becoming a drizzle.

me: there’s a virus. it passes with no symptoms, hides inside us for two weeks, and it’s bigger than our healthcare system.

amb: at first it wasn’t, but now it really is. so we’re all staying home to try and slow it down while we find cures, vaccines, face masks, ventilators. thousands of people are dying.

dino: i’m so sorry to hear that.

amb, hesitant: is it our asteroid, dino?

dino: but…isn’t this your thing? change, apocalypse? the collapse of capitalism? right relationship to the earth?

dino: it’s hard when death comes in big waves. so much grief all at once.

amb: and for what? earth is getting this brief moment of respite, respiration. but so many bosses are still endangering their workers and plotting ways to capitalize this crisis. is this the end of capitalism, or the beginning of global authoritarian rule, or extinction, or liberation? what are we meant to learn?

dino: woah. hey now. it generally doesn’t help to make too much meaning of things that are still unfolding. from within the storm, vision is limited. and you, my friend, you and your species are in the storm.

amb: but deeper meaning helps me get thru the hard parts of life.

amb: i need something to control. a narrative will do in absence of order, safety. i think i’ll become useless without meaning. the grief. the fear, anxiety, suspicion, sinophobia. the blur of my empathetic self feeling everything. i need something to root in to.

dino: i feel your chaos. perhaps instead of meaning, it’s time to revisit destiny.

amb: “the destiny of earthseed is to take root amongst the stars.”

dino: she was always nice to me.

amb: that’s amazing. i have been rethinking her destiny. or, our way of understanding it.

amb: i always thought it purely meant space travel. but she struggled with sequels, because no world she found in her imagination was as right for us as earth. and on earth, we are amongst the stars, here and now. this is a perfect home spinning in space. we may even be celestial to someone else.

dino, mulling it over: hmmmmmmm.

dino: perhaps. or maybe all of this, this way of being – on earth or in space – just isn’t your destiny. meaning, maybe human destiny isn’t the most important thing.

dino: i often think that we are all experiments of an earth figuring out her destiny. she likes living things. she likes sentient creatures that love and make family and eat. in our experiment, she learned she wanted a species that could look up to the stars, defend her from asteroids.

amb: oh wow. so…our experiment could be teaching her to not let evil people accumulate all the power and money?

dino: perhaps it’s just time to see how what you call evil, what i call wrong relationship, how that can spread, can disconnect a species from its future.

amb: right. it’s like the virus itself, invisible. but making the wrong structures and systems and beliefs so visible.

dino: we can never teach how evil a thing is better than it will show us itself, with time.

amb: but it’s in all of us. or most, to varying degrees. this i, i, i, exceptionalism.

amb: sorry. i want to let in new perspective. it’s just that all the problems are so big. and intertwined. and i’m supposed to be one of the ‘hopeful’ ones.

dino: what was that?

amb: sharp? ugh. sorry – that happens when i’m trying to be funny but i feel something else. sad. scared. grief.

dino: ah humans. tone is the tip of your internal icebergs.

quiet together for a while.

dino: tell me something. can you imagine being sad and scared and still feeling hopeful?

dino: can i offer something?

dino: it’s not an asteroid.

dino: hope, hopefulness, that’s the realm of the survivors. it’s not too late for y’all. grief shows us what we love, what we most want to protect. it swallows everything extraneous. and so much of what you love is still here. and tomorrow is another miraculous opportunity to change, to protect it.

dino: ha. i guess i’ve been a little scared too. i don’t want you to give in, give up.

dino, gently, into amb’s telepathic hair: we’re all rooting for you, you know. all the extinct ones. we’re all at your backs. you humans have so much beauty in you.

amb, sniffly: there is so much superhumanity and kindness and humility and change happening. and humor. and dancing online across all borders. and caretaking. and new kinds of honesty. and heroic communal isolation. and choosing to protect the future.

dino: very good. that’s life. grieve like the trees in october. but don’t forget you are nature, and spring is certain.

amb: i am glad to know we can be together in this way.

dino: me too. isolated is one perspective of this moment. deeply connected is another.

dino: love you too.

8 thoughts on “a telepathic communion with dino”