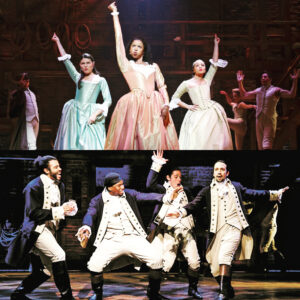 Hamilton is exquisite theater. Set, costumes, choreography, songwriting, cast, pace, character development, dazzle, excellence. The excellence of art made me cry most of the show. The songs are thrumming through my mind even as I write this. It is an act of undeniable theatrical genius.

It presents the founding fathers as distinct relatable human beings, and for me that makes it highly uncomfortable art. I don’t want anyone to watch it as a surface level experience, nor do I want anyone to miss it.

Any time I have to remember that there were/are no monsters, just flawed selfish limited human beings, it messes me up. It’s easier in binary, if I can erect an impenetrable boundary between my experience and that of those who would own/kill/dehumanize me…but that isn’t the world we live in. Heartache and grief are nearly universal, ego and foolishness too, and love.

The dream of America is/was so good. Everyone equal in a functional democracy? Yes! I just don’t know anyone who ever lived there. It was doomed by white supremacy, which made it impossible for these men in fancy shirts to see indigenous and Black and woman humanity. Today, watching this story that started 244 years ago, we are watching a lineage of our own doom. Watching while living and dying in a nation that could have been great, but the foundation is rotten with hate and it’s crumbling, toppling, turning.

With my analysis, there’s no way to see this musical as anything other than heartbreaking. My mind overlays it with the image @arlenparsa updated to show how many of the founding fathers were slaveowners, and then I sit with the contradictions. I don’t feel patriotic watching it, I think it’s more like seeing the childhood photos of someone who later abused me. Where did that wholeness go? Can that humanity be saved? 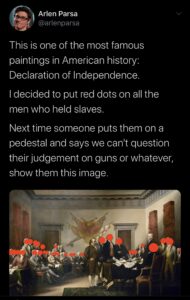 Hamilton is provocative theater because it is so excellent while dancing the same lines of centering white narratives and erasing others, even as the overt excellence of everyone from all their multitudinous backgrounds is why it’s so good.

I do want to see what Ishmael Reed did in Toni Morrisons living room though. And I want to watch Hamilton some more. I want it all.