today I am reflecting on the meaning of ‘by any means necessary.’

its Malcolm’s birthday today, and I think of his voice saying those words. at the time he said it, I believe he meant it as it is commonly understood – that we [black people] must be prepared to take up arms if that is necessary to defend our communities and liberate ourselves from the weight of white supremacy.

for me the meaning has evolved as I experience more and more of this world and its layers of oppression. there are a plethora of internal and external dangers to the soul – it is so hard to keep your integrity intact, especially if you long for change, if the current world disappoints you or makes you furious.

what if what’s needed isn’t sexy, intimidating, violent…what if what is needed is forgiveness? the kind of forgiveness that seems unimaginable, miraculous, holy, unattainable. like forgiving those who hurt you, hate you, building relationship with those who kill your children?

what if what is necessary is trusting people beyond their mistakes and shortcomings, trusting their best intentions – are we strong enough to default to trust at a community level?

are we able to be that militant? i want to be militant enough to admit i am changing and growing and don’t know the answers.

my sister is about to have her second child, which has me contemplating and researching birth and labor again. after aiyana’s death I was thinking of how quickly you can violently kill someone, versus how long it takes to create and birth someone. i find a small but awe-inspiring hope in the realization that giving life and love is harder work than taking it. giving life and love and forgiveness and creating family – those are the behaviors to engage in to step into the miraculous.

as we strive to free ourselves, to uplift ourselves, to transform ourselves and our communities, let us consider what ‘by any means necessary’ looks like in practice for us now – especially if the outcome is unknown, immeasurable and unconditional; even if the means, at this moment, is militant love. 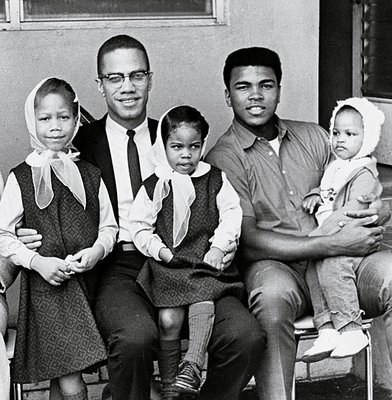 today i’ve been thinking about the violence of last night, and the lessons of malcolm’s life. at one point in his life, malcolm, aka detroit red, was engaged in a violent, survival-based life. he was doing cocaine, robbing rich people, menacing society, and shaming himself and his people.

the brother who committed this violent, awful crime last night is someone who has the potential of malcolm x within him. every single person who engages in desperate, violent acts, has that potential. for malcolm, it took going to prison, discovering god and humility, feeling the call to greatness and the power of words and service that was waiting in the wings of his life, finding himself and staying true to himself. his life was so short and so powerful, and it focused around this pivot to greatness. what would it take for the perpetrator of last night’s violence?

because i actually would go so far as to say that malcolm’s greatness came from the depths to which he had sunk. that is why his story stays with us, that is why we read his autobiography and then recommend it to people we love. that is why he was was our “manhood”, our “black shining prince”. because he was not just the story of a clean, neat life; doing the right things and succeeding personally. his was the story of vulnerability and impact – only by being vulnerable to his circumstances and his need for something greater could he transform into malcolm x. and only by being impacted could he know the full story of humanity – impacted by the place and time and people to which he was born; impacted by the circumstances of slavery and racism; impacted by desperation and ego; impacted by love, by god, by community.

the places he reached in the hearts and minds of those who heard him and followed were deep, and dark. the places where we hate ourselves, and believe we are inferior; the places where we believe we deserve no better. he used humor, ridicule and rhetoric to slip past the walls that surround the black community and say this tiny life of mental slavery and prison is not the way for us. we are a great people. we have to unshackle ourselves, and then love each other enough to free our greater selves – the community.

and that could have been enough. but at the end of his short life, when he could have chosen a road of limited but stable success, he humbled himself even more, he made himself even more vulnerable. he opened his heart to the people he had only ever thought of as his enemy, and saw that they too were human, were struggling, were creatures of deep spiritual potential.

i hold malcolm x in my mind’s eye when i think of what happened last night. i send my heart out to the little woman i held yesterday, and then send it out the further, harder journey to the man who beat her. i meditate on the humanity within him, the divine spark that he is holding, however deep down.

i hold malcolm x in my heart when i think of all of us, sitting with this unparalleled potential to love, restore, heal, grow and learn, pushing that part of ourselves down under layers of bitterness, sarcasm, hate, distrust, fear and even strategy.

can we reach out to those engaged in vastly different strategies than ourselves and ask to learn? can we travel outside of our comfort zones to grow our hearts? can we humble ourselves to the divine power so much greater than our individual needs that it can provide enough for everyone?

are we vulnerable enough to surrender? whether it is to forgiveness, or to greatness?

happy birthday, el-hajj malik el-shabazz. you humbled us all.