when my six year old nibbling Siobhán learned the election results, she kicked a fluffy chair.

yesterday she and Finn did their first direct action, shutting down a bridge to protest pipelines. she shared this incident of the fluffy chair and it sounds like she says fucking chair which, for me, was medicinal. 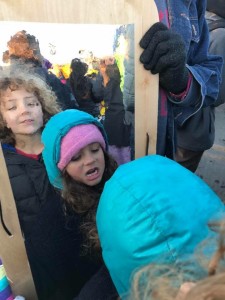 her father shared the video of the nibblings on the megaphone, and a white-skinned man on facebook’s first response was to police what he misheard of her language. he said that she wouldn’t use it if she knew about trafficked kids, that it wasn’t in the spirit of jesus, gandhi and king.

here is her father’s response, and why he is my favorite buddhist priest in minnesota: 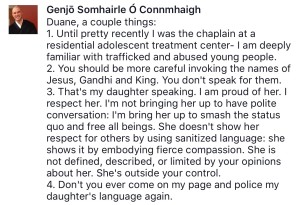 my five month old friend Isobel is one of the most vocal people i know. she speaks in essays, she has opinions on everything under the sun, and even though we can’t understand her yet, she shares her thoughts and participates in each conversation. her parents spend hours sitting with her each day in these conversations, and watching her smile.

on inauguration day, she learned to put her foot in her mouth, which feels like the most accurate statement made about that day.

yesterday my eleven month old friend and neighbor Meilu came to visit. this child has the kind of bombastic infectious cuteness that fills a room. i’d bought myself some fuchsia roses to have a pop of color in the house, to help with the transition from the technicolor rainbow earth patterns of mexico to the low hanging gray of detroit winter. Meilu pointed at the roses and i immediately tore off a petal and gave it to her, and would have given her all the petals if she had asked, no qualms.

she ate the petal.

she can now push herself up to standing, and she immediately applauds herself and joyfully receives the applause of anyone who wishes to celebrate her. her energy is like: ‘y’all may be gloomy from the news and the future but there is joy and magic available right here, right now.’ 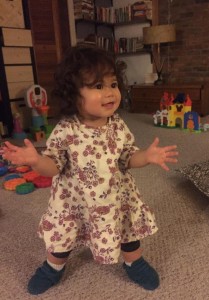 last night, i was upstairs visiting and watching her stand and clap and dance to music that sprung from toys. her father Nate said something profound. he said that her imagination will have to be so much bigger than ours because of the world we are leaving her. she will have to imagine beyond the systems we have been socialized into.

this made me feel so much compassion for us. how can we leap beyond the limitations engrained in us during the formative years of our childhood, as strategists, as a nation? how do we unlearn that cursing is worse than violence, or that humans are more valuable than the planet we live on, our only home?

it made me think immediately to how people respond to the idea of diverting taxes away from this administration.

i keep bringing it up with people who say they are appalled by the installation of the balderdash administration, who feel ashamed about talk (and existence) of a wall or a ban on muslims, who list out the lies and bad decisions, who bemoan having a president who sexually assaults women and kikis with the kkk and appears to not do his taxes or, at minimum, is guilty of fraudulent reporting.

when i say, we shouldn’t give any money to this administration – every appointment means that every dollar will be misspent moving society in the opposite direction of love, sanity, health, peace, justice and dignity, people american-splain to me how the tax system works. they either say “but education and highways” or “they’ll garnish your wages” or “you’ll go to jail”.

if not now, when?

i was a war tax resister for 13 years, and then battled with irs to create a payment plan i could grudgingly live with (i had to automate it because it hurt too much to write the checks each month and know how it was being spent – and that was during obama’s presidency!). i learned the hard (almost-jail) way that this tactic could only work as a society shifting move if a tipping point number of us did it together.

i saw a video that said 80% of americans didn’t elect this administration. i imagined what even a 40% divest and redirect move would look like. it was stunning in my head – so much support flowing directly to good work.

i saw another video that said california might secede, which is exciting in many ways, and doesn’t account for the majority of the country’s future.

and i wished, again, that we were more willing to claim what we long for beyond tweets and posts, with our actions, our time and financial resources. i wished we could imagine truly divesting en masse from the violent interventions, the walls, the weapons fed to our allies, the resource hoarding, the climate catastrophe we are creating.

i wish the future was more visible to us. we could be investing in and building what we want and need, we have abundance available to us. but because we cannot comprehend it, we move our individual resources along whatever internal guidelines hold us, we let the incremental move towards apocalypse pick up bullet train speed, and we complain, but we keep almost all of our attention and action on the daily list of balderdash fuckshit.

when i go down this line of thinking, feeling, longing for so much more from myself and all of us right now, i look at these babies and my system breathes again.

they will go beyond us.

they are learning fierce compassion, and to express themselves and be heard, and to celebrate joy.

and, hopefully, they will imagine and act beyond what the adults in their lives can even comprehend.