i watched oprah winfrey’s beautiful speech the other night…actually the next morning. that night i watched different people from my community documenting their experience as #timesup activist guests at the golden globes. a friend sent me the speech and i sat on the edge of my bathtub and watched it and cried hard because i get moved by bravery and collective moments. 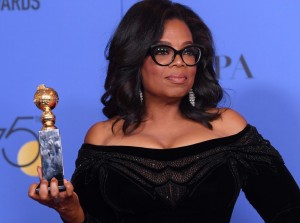 i thought oprah was stepping into a new territory, wielding her power in a new way. i didn’t think she was beginning a run for the office of president. i’ve been reflecting a bit on why, as i’ve seen tons of very heated debates on her qualifications, her wealth (which seems suddenly surprising to some people), her liberalism.

the first thing is that i think we all need to change our understanding of what presidency in the context of this country means.

i was recently at the obama summit. i met the 44th president there, and sat up close for michelle obama’s speech. in both of them i saw elegant beautiful brilliant black people who had survived something horrific. when the first lady spoke of the white house, it sounded like the biggest, fanciest prison experience available. listening to obama tell stories at the dinner table, i wondered how he carries the weight of the decisions he made as president. and i understood, again, that brilliance, and even individual integrity, are not enough to change a corrupt system.

Octavia’s words “all that you touch you change, all that you change changes you” are also a warning. so far, to hold the role of presidency means to become the keeper of war, the one who manages oppression, the prison guard and executioner. it is a role of drones, prison bars, barbed wire borders. it is a curse, even when held in competent hands.

and i am tired of seeing power handed off at the moment of implosion – as a coach i often support women and people of color who were celebrated and given roles of executive power only to learn that it was power over a hot mess. we’re lucky we survive these brushes with toxic hierarchy – power imbalances that put all the worst kinds of work on the shoulders of those willing to risk being leaders. the job description to come in after 45 is like firefighter-janitor-ER nurse-in chief.

so one reason i am not over here thinking #winfrey/[insert powerful feminist here]2020 is because the role of president as it currently stands is a set up to do the worst harm, and i don’t really want to see another black or brown person take on that burden until we have revolutionized the whole system, at which point the role will likely be obsolete.

and we’re far from revolutionizing even that role; at this point we need to reassert that president is a role of service, not empire. we don’t want to accept the precedent that wealth can qualify you for a role that is meant to be held by experienced politicians who have been practicing service to the people for most of their adult lives. my great uncle just passed – he was a state senator in South Carolina and he was beloved, available to his constituents, responsive. they guided his hand.

it isn’t actually meant to be about who is the most articulate, or charming, or rich. democracy is supposed to be about finding those who can listen to the people, uplift the best of our skills and longings, and weave a society that works for all of us.

as a post nationalist, i am divesting my energy from the federal experiment as the place where this kind of leadership can get elevated. 45 is a clear indication of failure. a system at this scale without a humane economic view (such as socialism, a pluralist commonwealth or other forms of economic democracy) leads to boorish, egotistical monsters in power. it’s what we will put our attention on – look how many people are reading the news every day now that it’s all dumpster fires and disaster.

we have to invest in a different way of being american than this experiment allows for, and our cities and communities are the spaces for that investment.

let’s give oprah a slate of incredible local leaders to back, help her redistribute her wealth into powerful feminist leadership in that way. politics is a field that requires diplomatic and collective skill, and there are brilliant women walking in the fire of elected office right now, learning to survive and lead – she can support them in 2018 and 2020.

because the other reason oprah doesn’t need to be the president is that she is already the emperor of her own life, network, wealth and narrative. oprah is living her best life as oprah. and i’m not mad at it, she’s been shaped by her time and taken great risks.

i am rarely angry at an oppressed person for besting the system, but it’s a corrupt system, and those who rest comfortably in its spoils should not be expected to lead us to the next system.

oprah is a black billionaire who loves love and transformation. she’s a survivor who has lifted herself out of poverty and lifted a lot of others with her. she has learned a lot in public, and she is generous and vulnerable with that learning. she claims her joy, her book nerdery, her health, her right to be a black woman on the cover of a magazine every month, her actress self, her producer self, her i-don’t-have-to-get-married-to-have-solid-partnership self, her podcasts full of spiritual leaders self…who knows what she’s like behind the scenes, but she’s a fucking fantastic public persona. let’s not destroy that with an american presidency.

over this past week i have been cycling between feeling the rough emotions of this moment and feeling for my/our resilience – our capacity to recover from harm. and i have been connecting with loved ones to do both these things, to vent and move thru the worst possible case scenarios and breath into “what now”, and “where do we go from here”?

i keep experiencing gratitude for the reality-based visionaries at movement generation and their teachings on false solutions – solutions which are politically possible now, but will not satisfy/save/serve us. (for example, it appears that elections as they are currently structured are a false solution. we need a popular vote for president, and instant runoff voting, minimum.)

fear has come in waves and i am getting curious about it, finding out what my fear wants me to know. fear is an intelligence, it makes me alert to danger. its not a state i want to linger in – its a way to come into wakefulness with what is. we knew we were in danger, our data set just got more precise. the danger is intersectional. and it feels smart to feel terror and grief when the place i call home attacks me and everyone i love.

as the shock of this change wears off, i am feeling lit up about our liberation from false solutions, and lit up about futures where we don’t fear other humans. while i still feel anticipatory grief over the changes coming, i can also feel anticipation for the ways we will tell the stories of our desired future, and bring those stories to life.

i find that i am already in the right place and supporting the right work. my loved ones are supporting each other, some taking to the streets each night, some reaching out for broader alliances, all educating ourselves. we have already been working to unveil the wound and make real solutions, to make what we really need to thrive and evolve as a species and planet, politically possible.

while it is tempting to focus on ‘the enemy’, what we pay attention to grows, and we need to continue to focus on the growth of justice and liberation technologies that are not dependent on a sophomoric state within which a portion of white people are terrified of the inevitable and acting all the way out. so i am feeling for right balance between resistance and rejection of ignorance/misogyny/white supremacy and focusing on building what we need. rereading the parables to help with this understanding.

for those who claim this whole thing is just about class (i haven’t seen any “fuck poor people” or even “kill the elite” tagging since tuesday, only race/gender/sexuality/anti-immigrant slurs and threats, so…), i assert that our economic vision of an abundant cooperative localized economy is more compelling in the long run. but we don’t need to just say that, we need to live into it with the way we organize jobs and funding in our radical work. keep creating models that can stand the weight of our communities.

we need to deepen our practice of removing white supremacy from our language and norms. it is not a dark time, it is a pale time. our people are not ‘minorities’. my heartfriend anasa troutman also challenges us not to use the term ‘people of color’, defining ourselves only by non-whiteness. it’s time to be creative and specific. i am going to either use very specific language to speak of communities i am supporting now, or use the language of impact, for the broader set of communities impacted by this intersection regression unfolding in our national government.

its also a great time to stop being polite. be loving, kind, direct. but most of all, be truthful – full of the capacity to speak the truth when you see and feel it.

i remain fascinated by us, anticipating how we will move beyond reactionary rhetoric and action, to build our connections and move forward from our deepest love and longing.

if you are overwhelmed with fear and terror, find a friend, sit face to face, and do this together:

first, take turns naming your fears and/or griefs. let feeling come with them. with your hands show where the fears live in your body. mirror each other, so you both get the experience of seeing your grief on another.

second, place your hands on your bellies and take turns naming things that make you feel resilient. imagine those things filling you up. rock and roll a bit, make more room for resilience inside yourselves.

third, offer gratitude to each other for both having the complexity to hold grief/fear and resilience in the same miraculous body.