“The Aldabra white-throated rail, a flightless bird that lives on its namesake atoll in the Indian Ocean, doesn’t look like anything special at first glance. But the small bird has big bragging rights, because it has effectively evolved into existence twice after first going extinct some 136,000 years ago.”
– Vice magazine 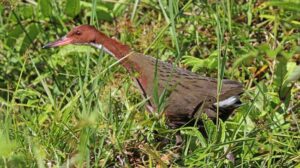 why does this story make me tear up and exhale? why does it activate all the science fictional hope in me? what is this flutter of earth adoration?

perhaps extinction all along has been a way of the earth tucking into herself the precious secrets which we refuse to handle with care.

perhaps she is saying, “if you want a simple life, if your tendency is towards the rudimentary, than i will pull into my body all of the most complex beautiful things. you butcher down and extract from me my magnificent wooden breathy life, and then cover me in boxes, flat concrete, boxes full of rows and boredom and lost hours. so i let my dream (and the bones) of the dodo bird hold safely near my heart – i don’t make permanence. that’s the only unnatural thing, you know, that which attempts to defy change.”

when i hear the news of your revolution, white throated rail, i wonder if you’ve only came to tell us that it is possible – not to not fly, to be defined as flightless (can you imagine making such an epic return and then every story about you includes the thing you don’t do?) – but to remind us that we are the only species who limits our creative wonders.

i think so many humans are terrified/hopeful/terrified to consider that she who made everything will remember how to make the world again, after us, after this foolish phase of us. or maybe we, too, will go and come again, more humble from the evolution years in the dirt?

i feel for the white-throated rail in my bones, the tasmanian tiger in my lungs, my black rhino skin, my mammoth heart. what i mean is: i wonder if i too carry the essence of forgotten miracles!

i was invited to be the opening speaker for a month of events at Brown University’s Women’s History Month line-up. it was lovely, everyone was kind and curious. i got to hold a copy of the book for the first time, an uncorrected proof that was sent to the school. it was like tasting nirvana. i spoke about octavia’s brood, and i also shared some other thoughts i have been reflecting on. here are some of the notes:

i believe that imagination is where the world changes.

and that the imagination of women is at the very least as important as the imagination of men, if not more so, because of the way our blood and dreams and content flows through to the next generation. there is something sacred about the time of carrying a child, everything flowing between you…what you think, hear, say and dream during that time.

i also believe that the imagination of those who are marginalized and oppressed is of utmost importance. those who benefit from the systems that exist have no necessary impetus to change it with any speed. it is perhaps easy for those with abundant resources to ignore the very fucked situation we are in right now – environmentally, philosophically.

i was reading something about how 98% of species that have once lived on this planet are now extinct, and humans appear to be the reason for it, for this holocene moment. terror is a logical response.

i am supposed to be extinct.

we don’t speak of it this way, but it is what oppression actually stems from. a superiority, a deep belief inside that certain things – whiteness, maleness, certain gods – that these things give you the priority on this planet, for the resources. and someone like me, born into blackness – my ancestors continued to create through a genocide, into queerness, and gorgeously thick, and i can’t see without these glasses, and i am generally not having sex to reproduce…i am an abomination perhaps.

and yet i feel miraculous. i feel like my love is really precious and valuable.

and that i am here, we are here, we who are abominations and slated for extinction socially, and survive? we’re here to offer something really important to the world about what it means to be human, and how we can do a better job at it.

and yet according to beliefs throughout time, beliefs that other people, other americans, hold right now, many of us, i, should be extinct.

so as a creature marked for extinction, who has so far survived, i think that it is my responsibility to imagine a future in which i not only make it, not only eek by, or survive, or serve, or get a place at a table never intended for me…my imagination has to bend the world towards justice, has to stay focused on universal justice, has to make it better for those who come after me.

my blessing is that i have thrown my lot in with organizers and social justice workers for my adult life. and sometimes that has been exhausting and heart breaking, but often it has been inspiring, and at the very least i am with people who are consciously shaping the future.

we then created a feminist future together through a workshop process. in our future, menstruation/periods were seen as a healing substance, one woman was producing a chocolate cure for cancer. there was video game polyamory and subversive women’s healing circles working across class based outer space boundaries between homes and prisons. it was quite beautiful. i have stories from several writing workshops that i will be posting this month.

this is an amazing way to be with other people, creating radical futures.