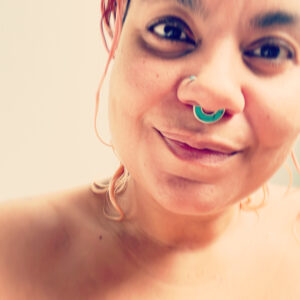 what if this body
is the ideal body
for this apocalypse
what if?
what if the future
is simply all the fat girls
outlasting the fools

it’s official! i am a little ptsd. a little phased, a little out of it, a little slow, a little clumsy, a little terrified when im coming into my apartment complex, a little unclear on how to create a safe space of my corner. i thought i was fine. i keep hearing screams and the sound of people moving anywhere near me is amplified. i double, triple, quadruple check that no one is anywhere near me as i move from my car to my building.

tonight on my patio we had an impromptu popular education self-defense session. here were some of the finer points:

1. the main goal is avoidance. at every step you want to avoid getting caught or stuck in a hold or pinned down. instead of trying to use force, as often (as a woman or someone caught off-guard) you are in the weaker position, you should aim to avoid or release yourself from the contact. if in a chokehold, drop. if you are facing the person, aim for a vulnerable point (eyes, neck) with full force – and then run.

2. a lot of things you might think will make you feel safer – mace, a knife by the bed, basically any weapon – may end up not helping. if you are in the weaker position, you could get overpowered and that weapon could be used against you. in the time it takes to find the mace in your purse, you are vulnerable to attack. better to have self-defense skills and awareness.

“we unveiled our legacies of violence”, and then talked about women’s health, how to love being a woman, how that makes the experience of it so much more fulfilling.

that was a totally great way to name and be present with the shock of this week. and naming it makes us stronger.

the other great thing is: tomorrow someone’s gonna come hold me…