i have muted r. kelly in my life. his music is nowhere in my home or digital collection. i have created a playlist that hits the specific place his music did before i understood it to be a pedophiliac’s songbook.

i have not wished death on him, or torture, or the end of his possibility in life. i have not denied that he is an adult who was abused himself. i muted him, meaning i will not financially contribute to his harmful behavior.

i muted him because it became very difficult for me, as a survivor, to listen to his content. and because he’s an active predator, because there are girls still caught in his sharp teeth, living in some sex hell of his direction.

the creators of the #muterkelly campaign, uplifted in dream hampton’s visceral series Surviving R Kelly (free on Lifetime), realized that pulling his economic rug out from under him was the only way to shake his abusive foundations and possibly have a chance to stop the harm. parents of potential victims aren’t going to stop shrugging and saying ‘well he was acquitted tho.’ his record label had not dropped him in spite of the years of allegations creating a pattern of clarity around him (they’ve since parted ways). and a jury acquitted him – what he’s up to is still seen as preference or oddity by some, not serial rape, abuse and torture.

so we mute him. the campaign is not silencerkellyforever or disappearrkelly. it’s muting, an act designed to put pressure on him to release the girls and stop harming new girls.

i keep seeing this meme go around: 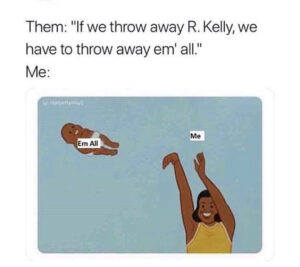 i want to explore this a bit, as well as why artists we want to stand with little girls’ safety instead keeping expressing their love for a man who repeatedly abuses little girls.

i think we are in very early stages of beginning to understand transformative justice, and in absence of TJ being a common practice, we think disposal or grasping are our only moves. we either have to throw the person with bad behavior out of our community, or hold onto them with love because they were abused too, because they are oppressed too, etc. and both of these strategies fail to liberate us from the cycle of harm.

if abusers see that the mass response to the truth of abuse is to dispose of abusers, they are encouraged to be more secretive about their behavior. this means not seeking the help needed to truly end the harmful behavior. hide it, deny it, continue, protect your reputation instead of your soul.

and if abusers see that people will have their backs with no public demand for accountability, they are given a green light to continue to act from their abuse shaping, rather than do the hard work of healing, changing.

what we need is a path to redemption: understand that you caused harm, stop future harm, turn within, repent, apologize, learn boundaries and how to navigate power and connection, grieve, grow. transformative justice recognizes that the state upholds systems of oppression more than accountability, and requires us to name the truths within community, to stop the harm ourselves.

TJ doesn’t guarantee peace between abusers and those they’ve harmed, but it offers the possibility of ending the harm. it doesn’t feel good, it feels like untangling knots made of nerves. these are mostly slow processes, but if we really want a world without childhood sexual abuse, without rape, without abuse, we must believe the process can work, and we must get rigorous in our practice…because it’s not enough to throw one monster out of the village when the monstrous behavior is happening everywhere. and abusers produce abusers.

with r kelly (and a lot of other well known abusers) the first steps generally happen out of sight. people asking them to stop, people trying to get justice through legal systems, quiet warnings proliferating around a repeated abuser. in most cases, a lot has taken place before we reach the point of public pressure. this is because, sadly, our patriarchal society believes, in a deep core place, that this is how things are, how men/adults are, how sex is, how power works.

public pressure is a risk, because we don’t cultivate nuanced thinking in our current education or media systems. going public makes room for everyone to point away from themselves, their families, the abusers protected in their own communities, blaming the monster of the day instead of acknowledging the ecosystem of harm.

that said, i am impressed with the strategic use of public pressure in r kelly’s case because he is still actively involved in harm. this will be different in other cases, where the harm is in the past and the need is for an apology or a reckoning, vs an intervention. but public pressure isn’t the end.

there are consequences. i want to invite everyone to listen to Mariame Kaba all day every day, but especially on this point. consequences are not disposal, and they aren’t punishment. if someone won’t stop causing harm, one consequence is that they stop getting celebrated by the communities they harm. another consequence is losing a job. or having to work within more limited boundaries.

muting r kelly after decades of sustained abuse is not disposal, it is a consequence of his choices to persist in abuse, to not seek help to break his patterns. Mariame says “it’s the harm” that should be the focus, rather than demonizing or isolating anyone. how do we stop the harm? not by throwing anyone away, not by punishing broken people, but by taking responsibility for harm in our communities and creating systems of healing and boundaries to allow for different futures to emerge.

4 thoughts on “muting is not disposing of (distinctions)”