how to respond to an invitation from the Obamas

when i was invited i thought it was spam or a mistake. then very coherent emails keep following up.

i looked on the internet and yes, it was true, the Obama Foundation was having a summit on those dates in chicago. i didn’t really have time to go.

as y’all may remember, i identify as an American revolutionary who endorsed Obama, twerked on a cop car the night he won, critiqued him with my work, and eight years later thanked him for taking on the impossible job.

and i was asked to be on a panel about the role of fiction in social change (Octavia’s Brood) moderated by my college friend Courtney Martin, with NY Times bestselling author Angie Thomas. a chance to plant seeds.

my friend Sally Kohn saved me a seat at the opening event and basically held my hand through the first hour until my outsider anxiety settled. i centered in my analysis and what i care about, and realized i have enough ground to be able to listen with an open heart.

so much happened so quickly – the Obamas were actually there (i know, duh, but still), they set a no selfies rule (grown folks business! as Oprah says, be 1000% present!). there were amazing speeches (my favorites were Heather McGhee and Anand Giridharadas), and people like Thelma Golden and Lena Waithe and Krista Tippett were just walking around.

how to fall for Lena Waithe

yes Lena is that fine in real life. and gracious. the first time we met i was too shy to interact much, though i did thank her for her existence and she did compliment my look (style icon compliment swoon).

the second time, she sat behind me while Michelle was speaking. now, i didn’t know she was sitting behind me, just that whoever was right behind me was all up in my ear saying “mmhmm, yes, that’s right, preach” at all the same times as i was, and thus we were kindred. so when i turned around and saw that it was Lena, i just hugged her (cue Insecure-style vision of our great love). she smells so right, and deserves this full paragraph of adoration.

on the first night there was a big gala style dinner with assigned tables. we all went over there in buses, and it really was like, buses of excellence.

the biggest impression i was left with from the entire summit was that there are so many people who are solution oriented and sane, divergent but in conversation with each other, brilliant people focused on the future. and i have to take Octavia’s lesson (everyone is a potential ally) seriously and understand these brilliant people as potential allies in the work i am passionate about.

and everyone, big speaker and participant, was on the bus.

i rolled over with my new friend Candice, who is part of the Harriet Tubman Collective. we got little cards with our table assignments and headed into the museum. my table number was 46, which i assumed meant somewhere near the back.

in fact it was right up front and center. and when i got there there were several other people all looking at the little cards with our names on the table.

my internal dialogue at this moment was – “whaaaaaaat?
but do they know who i am? who i serve?
but i’m a post-nationalist revolutionary!
how do i best use this moment to grow our work?
but my whole outfit is see-through!”

and then i heard my nibbling Mairead’s voice in my head saying “my fravorite name, Barack Obama”.

we were all surprised and unable to play it cool, so we sat and bonded with each other a bit until everyone was seated and the Obamas arrived in the midst of the black suited security river that flows around them.

President Obama hits the same intersection of charming, handsome, smart and corny as my father – universally appealing (unless you’re racist, which, go heal…or just can’t with presidents, which i respect). he feels familiar. he and Michelle walk with dignity and ease in their bodies. he talks with long, thoughtful pauses and when he smiles it reaches his eyes. his presidency is behind him, and he seems excited about what is ahead of him.

Michelle was one table over, facing me, and i think we caught eyes and had a moment – but i haven’t been wearing my glasses so i can’t swear by it.

a group called the People’s Supper set the tone and i was really moved by Jennifer Bailey, one of the founders of the group, who shared her family story with deep vulnerability from the dinner stage.

we then had facilitated time (good job Whitney!) to share a bit about our names and how we show up in the world. two minutes to tell the president how i show up in the world? i spoke of magic, miracles, writing, facilitation (it felt good to speak the names of Movement for Black Lives, Black Lives Matter at that table) and love.

Obama gave me a big hug at the end, said he saw the love goddess in me. i felt similarly, that i saw in him, and in Michelle, a great love – for each other, for the nation, for our species. we are walking very different paths, but love guides those paths through the impossible. afterwards i felt grateful to be in practices of complexity.

how to cry about TLC in public

the next day i attended a session on design of the foundation and wrote community benefits agreement all over the pages. there’s no reason not to do one and model that as a best practice for development that serves the people.

then i did my panel and the highlight was Angie, a YA writer whose novel The Hate U Give is slaying the NY Times bestseller list. she told a story about her love of 90s foundational group TLC that made us all gasp and concluded with a big reveal. we had to cue Waterfalls before the panel was over. Courtney was a masterful moderator and we had some truly authentic time together.

how to take a selfie with the president

shortly after that i was sitting in on the fantastic Mia Henry’s session and the president came through to listen, and was asked to say a few words before he left. i honestly don’t know that he said much, but that might be because i was busy snapping this abysmal photo. 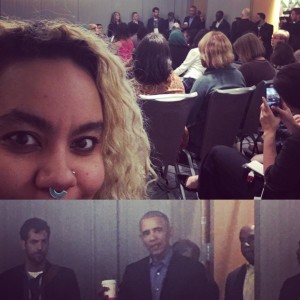 i left before the concert, feeling hopeful. i think that was the point.

pleasure in the age of [insert president elect]

if you are actively working on the election (knocking on doors, calling black voters in the south, talking to voters who feel confused, etc), thank you. remember to eat, shower […]

Read More… from pleasure in the age of [insert president elect]